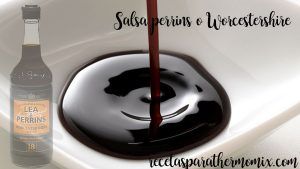 Always when I was little at home there was a pot of black sauce with an orange label in the fridge, which I never took much notice of, but a typical one seen there in the fridge door

that sauce was called Worcestershire sauce, also known as the most common brand that is perrins or simply English sauce for others

Preparation of perrins sauce or Worcestershire

We put in our thermomix glass ginger, mustard, cinnamon, curry, black pepper and rose, cardamom and cloves
We crush for 30 seconds, speed 10.

chop the onion, garlic and anchovy
for 2 seconds, speed 5.

We make in our thermomix now the liquids, the tamari sauce, the vinegar and the molasses.
Cook for 10 minutes, varoma temperature, speed 2, (without beaker to evaporate).
Then we programmed 25 minutes, 100º, speed 2, without beaker.

When finished, place the cup and grind for 1 minute, speed 8.

We strain with a sieve and reserve in a container with a lid.

Let mature in a dark place for at least 2 weeks shaking it from time to time.