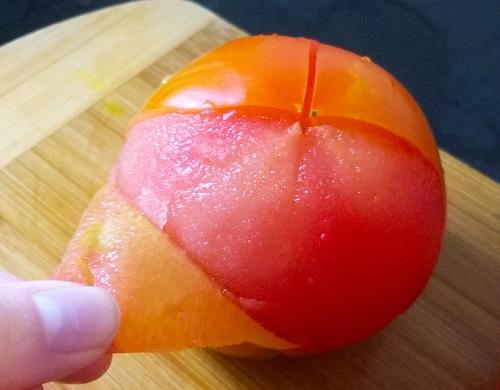 Trick – How to peel tomatoes with the Thermomix

More and more households are encouraged to have a kitchen robot and this is very useful. This recipe calls for tomatoes

Yes, because it allows you to prepare everything from drinks to starters, first courses or desserts quickly and with an exquisite flavor.

We have many recipes with tomato

However, it gives us many more possibilities. A good example of that is the trick that now we are going to introduce you: how to peel tomatoes with the Thermomix.

Yes, you read that right. This device can help you remove the skin from that product in a really fast and effortless way.

Do you want to know how? We will indicate it step by step below so be prepared to take note.

The process to peel the tomatoes with the Thermomix

If you have decided to learn to perform the task at hand with the aforementioned robot, it only remains for you to read how it is done:

To begin, you must proceed to pick the tomatoes and, with the help of a knife, make several and small cross-shaped cuts.

Then pour some 250 grams of water approximately.

Then also put the Varoma And, of course, put the tomatoes in and put the lid on properly so that the steam won’t escape.

The next step will be to program the aforementioned Varoma device at spoon speed for approximately 7 – 8 minutes.

After that time, open the lid and remove the tomatoes. You will see how these you can peel to perfection when they have cooled, you will do it without effort of any kind.

Have you seen what a simple and effective method to avoid the hassle of having to remove the skin from tomatoes with a knife to prepare a salmorejo or a salad, for example?

NOTE: INTERESTING RECIPES FOR THIS NEW YEAR … Surely you are also interested in these Other post that we have taken for these holidays

Follow us on Facebook!!
subscribe to our weekly newsletter for free.
Each week you will receive in your email a lot of new recipes to make with your Thermomix (desserts, shakes, spoon dishes, stews …). You can also follow us on the Facebook page to keep up to date with the Thermomix world. You just have to click on the box below to join our Facebook page, what are you waiting for? Endless recipes for Thermomix are waiting for you!

anterior» Trick: how to crush ice with the Thermomix